Does The Press Cover Up The Harm Caused By Politics?

Home /National/Politics/Does The Press Cover Up The Harm Caused By Politics? 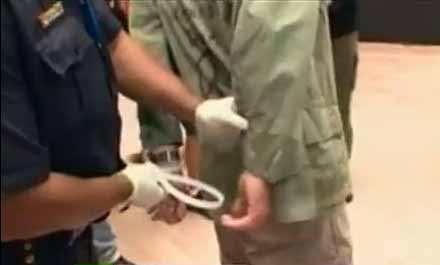 Thoughts about the Boston arrests

Our commonsensical public witness is often marginalized and flummoxed by the popular press.

Its he said/she liars’ exchange creates a fog in which the practical logic with which we navigate our daily lives is lost and we come to believe that issues are more complicated than ordinary people can grasp.

In this fog we fall back on belief systems, a set of preconceptions that serve to deliver us from the confusions with which we’re confronted. We use these belief systems to cut through the fog. We rely on Barack Obama and Rick Perry and Mitt Romney to explain things to us, even though we know they’re spinning everything in sight and the more they spin the more bafflement the press lays on us.

The press becomes a kind of holy beast arbitrating between less powerful creatures, and in so doing renders them ever less powerful and more alienated. This is the opposite of what our founders hoped for in the First Amendment. They hoped a free press would unfetter and empower us. And most of them feared corporate avarice more than foreign empires. Indeed, George Washington thought our real enemy was the greed of merchants and bankers, not the Redcoats.

Part of the problem is that we don’t have a free press. We have a corporate press beholden to big money influences. It is, therefore, a censored press. But an equally pernicious problem is the nature of the beast itself, its habits and 19th Century newsroom mores. It’s ravenous for dispute. The liars’ exchange is its natural habitat. Round-the-clock mendacious political dispute and contention give the press an out for not spending money to undertake real inquiry. Here again, corporate greed is at issue. The press moguls are shortchanging us to hand over quarterly profits to shareholders, and the never-ending election cycle that has hopelessly politicized our society plays into their hands.

The result is a press gaming the politicians for its fodder, the political class gaming the press for exposure, and a handful of idealists like FactCheck.Org, Poynter and the Pew Research Centerfor the People and the Press trying to keep the pols and press honest.

Let’s consider the Occupy Boston protests. One hundred protesters are arrested. Mayor Thomas M. Menino says that while he sympathizes with the protesters he must make sure Boston continues to function efficiently. A city that withstands hurricanes, bombings, catastrophic fires, massive corruption and God knows what else-and he’s worried about the legitimate right to protest bringing the city to its knees. Sure he is. The cops can handle huge parades, drunken revelry, and the like, but they can’t handle Occupy Boston except by making mass arrests. And the press, by taking this seriously, and diligently reporting every nuance of such blatant bullshit, lays down a fog over the essentials in dispute. Like the fog of war, it’s a big-money fog, a bankers’ fog. What’s really going on here? Mayor Menino becomes the news. His feckless excuse for abrogating the First Amendment rights of citizens in the name of civil order becomes the news. The police become the news. And the fact that thousands of Americans all over the country are decrying banksterism is marginalized. The fundamental issue is swept off the table and we’re left with refuse. So the protesters become refuse. They become the problem, not The Man, not The Man’s banker bosses, not the people who bankroll Menino’s campaigns.

But the press is entangled, and entangles us, in the spin-in Menino’s jesuitical reasoning, in what the prosecutor says to the judge and the judge replies, in the soap opera of rounding up citizens and transporting them to a jail they paid for with their taxes. All the real issues are sacrificed to a long day’s wallow in the fog. The fog becomes the news, and all the underlying issues are shunted to the sidelines.

It’s highly rewarding for the press. Its attitude about the protests is “been there, done that,” so it’s eager to find new drama, new he said/she said confabulations. What could the press be doing instead? It could be telling us the stories of the protesters. It could be looking at the Boston foreclosure situation. It could be telling us the history of protests in Boston, starting of course with the Tea Party. It could be doing any number of things it’s not doing, things that might lift the fog and keep the focus on the big issue, which is the corporate greed grinding down the 99 percent.

Mayor Menino is saying nothing more than what Benito Mussolini and Adolph Hitler said when they swept dissenters off the streets of Italy and Germany. They were maintaining law and order. They were guaranteeing the efficient operation of the infrastructure. But whose infrastructure are we talking about?

One of the central points of the Occupy Boston protesters and their fellows around the country is that the 99 percent have been forced to pay too much for this infrastructure, while the one percent has benefited profligately and paid much too little. But the press is silent about this issue. As far as the press is concerned, the city and its infrastructure might as well be Mayor Menino’s and, by implication, the big money he serves. The press could be asking who will pay to rebuild our Third World infrastructure, an infrastructure that in its heyday enabled the one percent to become so rich.

Does the mayor serve big money? All the politicians, of every stripe, do, because in an obsessed environment of politics 24/7 there is no way to campaign and get elected without it. We don’t have government anymore, we have politics, because there is no time to govern, no imperative to make the compromises necessary to govern in the name of the people. It’s all about money, and that’s what the protests are about. When we read about Washington and our state capitals we’re not reading about government, we’re reading about politics. But the press finds no way to get its collective mind around this immense story.

When we read about the protests and the arrests in New York and Boston and elsewhere the press would have us believe it’s about public safety, it’s about mayoral actions and rationalizations, it’s about almost anything but the gruesome facts that more than 40 million Americans are impoverished, more than 14 millions are jobless, damned few us can afford the life that is so expensively advertised in our media, and we’re waging endless foreign wars that have bankrupted us. The media attitude about an issue it has once raised is that it is old news. But the paradox eludes the press and us that if politics 24/7 is an ongoing story, how about the fact that government has been supplanted by partisan bickering? The media’s 19th Century mindset, its chronic inability to get its mind around the ironies and paradoxes that beset us, well suits press lords whose primary concern is picking its properties’ bones to fatten shareholders.

So the press reports on the nature of the fog, just as it dramatizes weather on television, as if somebody were to blame.