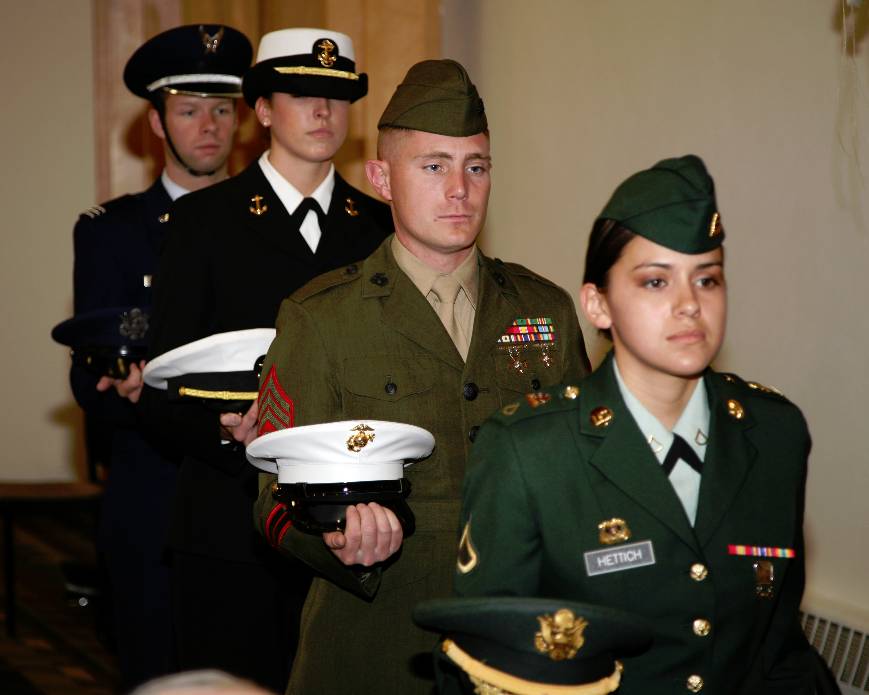 Utah University (the U.) established a Veterans Support Center to serve as a focal point for student veteran activities and to help them transition into the sometimes unnerving world of civilian life.

The center, located on the first floor of the Olpin Union Building, is officially open and under the direction of Roger L. Perkins, who came to the U from a similar position at Western Governor’s University.

“The charter of the center is to increase the visibility and success of veterans on campus while streamlining their access to whatever support they need,” Perkins says.

He notes that the center is set up to help with the myriad needs accompanying any student navigating a large university system for the first time, in addition to the specific needs that may arise in the veteran population. “The center and our staff can help with anything from finding a tutor for that pesky organic chemistry class, to helping find part-time employment, to arranging counseling for post traumatic stress disorder,” Perkins explains.

The center’s team also will work to help veterans with their educational benefits. Perkins and staff advise students about how to apply for veterans benefits and where to go on campus for various services. They also act as advocates for student veterans should the need arise.

The Veterans Support Center falls under the auspices of Student Affairs at the university. Associate Vice President for Student Development Kari Ellingson says that the office grew out of a “perfect storm” of newly collected data on student veterans issues coupled with establishing the National Center for Veterans Studies (NCVS) on campus and support from the Office of Budget and Planning.

David Rudd, dean of the College of Social and Behavioral Science and co-director of the university’s NCVS, explains there is a great need to provide support for this portion of the population at large. “After ten years of war in Iraq and Afghanistan, large numbers of veterans will be making their way to college and university campuses around the country. In addition to navigating a somewhat complex Veterans Affairs benefit process, a student veteran service center will allow us to target additional needs across the full academic and social spectrum. Some of the research we’re completing with the NCVS is revealing a range of unique characteristics and needs of student veterans.”

The center is not only designed to help veterans, Ellingson notes, but she and Perkins see a twofold education process: educating veterans about how to transition into civilian life and educating others on campus about how to better serve a quickly growing veteran population. She said Perkins is the clear choice to take on this task.

Perkins, a veteran himself, wants to make sure student veterans are treated with respect and understanding: “I want to provide a comfortable place where a recently deployed veteran can speak openly about his or her experiences without the fear of offending anyone if they accidentally slip up and use colorful language.” He looks forward to helping veterans better understand how life at a university works.

And he says the center can help build communication between faculty, staff, veteran and non-veteran students.

While infrequent, there have been misunderstandings between veterans and others based on what Perkins refers to as a “clash of cultures.” He notes, “A simple example of the misunderstandings that arise is that there isn’t a lot of time to waste in the military, so most recently deployed vets speak directly in order to get to the point and move on. This can come across as overly-assertive and can put off someone who is more familiar with the slower pace of a university.” By paying attention to these small but important details, Perkins hopes to reduce these clashes and increase the understanding on both sides of the issue.

This summer Perkins is focusing on getting the center, its Web site, and other key infrastructure up and running while meeting with staff, establishing a student advisory council and developing partnerships with other offices on campus. He will reach out to student veterans through a public awareness campaign, information booths and other efforts when fall semester is underway.

Perkins points out that while it’s obvious there are veterans on campus who are going to school using their GI Bill benefits, there are also “hidden” veterans who, for a variety of reasons, do not receive those benefits and are frequently overlooked. By establishing the center, he hopes the university has provided a clearing house for all veterans who attend the U and that he can help these men and women succeed in their educational efforts in a “vet-friendly” community.

The center’s Web site houses a survey where these “hidden” veterans can identify themselves. It also provides demographic data about the U’s student veteran population. Go to http://veteranscenter.utah.edu for more information.