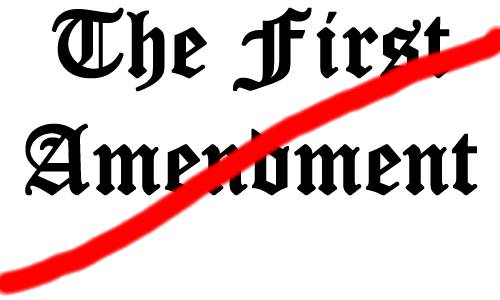 The Obama administration has drafted a new, little-noticed executive order that would plainly stifle free speech. The “Disclosure of Political Spending by Government Contractors” order is still a draft, but if the administration has its way, the order will be in full force soon.

Premised on the idea that sunlight disinfects, President Obama’s executive order would require all bidders for federal contracts to disclose all financial contributions to candidates standing for election. The order includes all corporate contributions and all personal giving in excess of $ 5,000 by officers and directors of corporations concerned, and it also requires the disclosure of contributions made to third-party groups like the National Rifle Association or the Center for American Progress. The order takes direct aim at the $ 530 billion in federal contracts that will be issued in 2012, and it represents the latest move in a series of tactics designed to drag the Supreme Court’s defense of the First Amendment in the Citizens United decision through the mud.

The Court’s decision, announced in 2009, struck down parts of the McCain-Feingold Act that prohibited corporations and unions from broadcasting on behalf of candidates close to a primary. The move sparked a public feud between President Obama and the Court, as Obama (in an infamous moment) chose his State of the Union Address in 2010 to openly criticize the ruling. Reacting instinctively, Associate Justice Samuel Alito responded to Obama’s factually incorrect criticism by mouthing the words “not true” in a very public way.

The Court, of course, was acting to defend free speech from the muzzle of government regulation, even if that regulation was proscribed in the name of openness and transparency. Affirming the First Amendment, the Court sided with the Founding Fathers, who hotly rejected the idea of disclosure on all political communication. Indeed, the pseudonym “Publius” was employed by Hamilton, Madison, and John Jay as a way to protect themselves as they defended the passage of the new Constitution in The Federalist Papers, and similar *nom de plume* moves came with such high-profile public debates as Thomas Paine’s *Common Sense*, signed “Written by an Englishman,” and a cabinet debate between Hamilton and Madison under the names “Pacificus” and “Helvidius.”

Anonymity is an important cornerstone to American politics because it insulates the speaker from reprisal by the government or another disgruntled group in the face of political criticism. Additionally, providing the speaker with anonymity allows the argument to stand on its own merits, removing the caustic ad hominem barbs often attached to political discourse. The provision of anonymity has a rich heritage as, in the words of the Court, “a shield from the tyranny of the majority.”

This shield remains just as important in the digital era. In the wake of the Proposition 8 debates in California, major financial supporters of Prop 8 were routinely peppered with death threats, vandalism, and other intimidation tactics. Property was defaced, certain supporters were fired from their jobs, and some religious organizations even received envelopes containing white powder. The intimidation tactics were employed after the disclosure of the names, address, and employers of Prop 8 donors, providing would-be assailants with the data to construct a literal roadmap for violence.

President Obama rejects the condition of anonymity on political speech as a means of advancing controversial views, except (apparently) when it benefits his own party. In objecting to Citizens United, the president decried the donations of anonymous corporate-backed super-PACs to candidates, but he hasn’t objected to the contributions of Majority PAC or American Bridge 21st Century – both of whom have substantial anonymous donor bases – to his reelection efforts in the West. Tellingly, his new order also does not require unions to disclose their political contributions.

Now President Obama appears to want to institutionalize the spoils system by making political affiliation part of the bidding process on federal contracts. Rather than awarding the contracts to the companies that provide the best combination of prices and services, the contracts may flow to political allies. These new disclosure requirements could turn discussions about cost and efficiency into purely political calculations by allowing bureaucrats to award contracts exclusively to their followers. Moreover, the public dissemination of this information on data.gov, as proposed by the order, would allow for violent backlashes by political opponents.

Anonymous speech has been protected by the First Amendment and affirmed by the Supreme Court. By allowing the White House to adjudicate federal contracts based on political donations, President Obama is jeopardizing a long history of valuable political anonymity in this country. Ironically, Obama warned that the Citizens United decision “strikes at democracy itself.” The First Amendment is a vital part of that democracy.